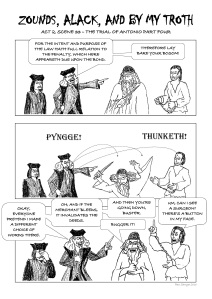 Notes on The Trial of Antonio Part Four

Portia brings the trial to a close as only she can in this week’s installment of the six-part journey through The Merchant of Venice’s climactic showdown.

This one went through more drafts than the others in the series. When I came up with the idea of The Trial of Antonio, I hadn’t read or seen the relevant scene for a while – and somehow I’d got it into my head that “Lay bear your bosom” was Shylock’s line rather than Portia’s (which would have sent her sprinting for the exit, convinced she’s been rumbled.)

When it was rejigged to fit the script, I realised it could now serve an important purpose by actually wrapping up the trial in the cartoon, rather than relying on the reader knowing what happens in the play. Hopefully, this little run of episodes should hang together as a story in its own right. Hopefully…

Nerissa’s facepalm featured in both versions, of course.

Like this place and willingly waste your time in it;