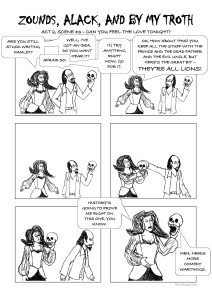 Notes on Can You Feel the Love Tonight?

The Lady has a few notes on how to improve Hamlet in this week’s nod to the world of Disney.

The Lion King having a little bit of Hamlet in its DNA was always a topic looking for a Zounds, although I’ve always felt the plot owes just as much to Henry IV, with its prince who’d rather hang out with the portly comic relief than act like a king, until a crisis compels him to look to his responsibilities.

An earlier Shakespeare and the Lady cartoon is currently on display in Leeds Central Library as part of an exhibition associated with the Thought Bubble Comic Art Festival. The other pieces on display can be seen here.

Foretelling the future and resurrecting the dead can now officially be added to materialisation and mind control on the list of magic powers the Lady may or may not possess, if you like the idea of her being an honest-to-goodness muse…

Like this place and willingly waste your time in it;